Dear Colleagues,
Mangalam Research Center for Buddhist Languages in Berkeley, CA is pleased to announce two related programs in the field of Madhyamaka studies, to be held from August 3-9, 2012. Consistent with MRC’s mission, the programs will focus on issues of language, philology, and translation.
The two programs will be led by Drs. Anne MacDonald and Luis Gómez. Invited participants include Drs. Bill Ames, Dan Arnold, Karen Lang, Akira Saito, and Kevin Vose. Also participating will be Dr. Michael Hahn, one of MRC’s two academic directors, and Dr. Siglinde Dietz, Visiting Scholar in Residence, as well as the MRC postdoctoral fellows.
MRC invites other academics and advanced graduate students with an interest in Madhyamaka to apply to participate in these two programs.
The first program, which will run from August 3-6, is a seminar on selected portions of the Mūlamadhyamakakārikā. The anticipated focus (subject to change) is the first 5-7 verses of MMK ch. 4 (refutation of cause and effect); MMK ch. 5, with consideration of its commentary in the Prasannapadā, and selected verses from chapters 15, 24, and 25, with reference to the Prasannapadā where helpful.
The second program is a symposium, to run from August 7 through August 9. The symposium is intended to focus on translation and terminology choices for key Madhyamaka terms in light of the discussion during the preceding seminar.
The second program is open only to individuals who have completed the first. Interested persons who wish to attend only the first program are welcome to apply.
The programs will be held at Mangalam Research Center for Buddhist Languages in Berkeley. Details on how to apply, costs, housing options, etc. will be posted on the MRC website, www.mangalamresearch.org.
Regards,
Jack Petranker Director, Mangalam Research Center

Greater than A Wish-Fulfilling Jewel: on the translation of the first of the Eight Verses

Dge bshes Glang ri Thang pa (1054-1123)’s Eight Verses of Training the Mind (blo sbyong tshigs rkang brgyad ma) is a seminal work of Tibetan literature, and surely deserves to be ranked among the world’s spiritual classics. There have been many translations, especially in recent years, largely on account of its popularity with His Holiness the Dalai Lama, who has taught it on numerous occasions all over the world. Historically however, it appears to have received less scholarly attention and inspired fewer commentaries than related works such as the Seven Points of Mind Training (blo sbyong don bdun ma) attributed to Dge bshes 'Chad ka ba (1101-75), who, incidentally, also composed a commentary on the Eight Verses. Perhaps this shortage of commentarial literature explains the apparent difficulty of interpreting the very first of Glang ri Thang pa’s eight verses.
There appear to be two versions of the Tibetan root text available. In the first, which is found for example, in theg pa chen po blo sbyong brgya rtsa (Delhi, 2004. p. 177), the first verse is as follows:

A more common version, which is found here on the Dalai Lama's official website and elsewhere, gives the following:

The question that concerns us here is: who or what is greater than a wish-fulfilling jewel (yid bzhin nor bu las lhag pa)?
Of these two versions of the Tibetan text, the first would seem to imply that it is all sentient beings who are being praised so highly. The second version, with its connective particle at the end of the second line, would indicate that it is actually the highest aim or supreme objective (don mchog), which is greater than the fabled cintāmaṇi.
Dge bshes 'Chad ka ba’s commentary, included in the Great Collection of Mind Training (blo sbyong brgya rtsa), follows the first of the two versions above. It begins its explanation of this verse by describing how we can train to see sentient beings as wishing gems and offering a comparison: just as a wish-granting jewel can't cleanse itself, beings can't free themselves from the mire of samsara, nor can they wash away their suffering and its causes. It goes on to say that just as a wishing gem can become the source of all that we desire once we have cleansed it, sentient beings can, with our help, become a source of all temporary and ultimate benefit. It is on the basis of sentient beings therefore, Dge bshes 'Chad ka ba explains, that the unexcelled state of buddhahood can be achieved (sems can la brten nas sangs rgyas kyi go ‘pang bla na med pa thob par ‘gyur ro).
With Dge bshes 'Chad ka ba’s explanation in mind, we could translate the first version (the one he uses) as follows:

I will train to see all sentient beings
As greater than a wishing gem.
With the thought of accomplishing the highest aim,
I will cherish and regard them as supreme.

If we now look at previous translations of this verse, we can divide them into two groups based on how they answer our question.
1. All Sentient Beings
In an early English translation of the text by Geshe Rabten, Gonsar Tenzin Khedup and Lobsang Kalden (1982), it is all sentient beings who are accorded the highest honour and described as greater than a wish-granting gem. The translators render the verse as follows:

“With the determination of accomplishing the highest welfare for all sentient beings, who excel even the wish-granting Gem (Cintāmaṇi), may I at all times hold them dear!”

This is also the interpretation favoured by members of the Asian Classics Input Project (ACIP):

“May I think of every living being
As more precious than a wish-giving gem
For reaching the ultimate goal,
And so always hold them dear.”

2. The Supreme Objective
Other translators, such as Heidi Köppl (2004), consider that it is the “supreme purpose” which is superior to a wish-fulfilling jewel. Still, in her version, it is all sentient beings who accomplish this:

“Considering that all sentient beings
Accomplish a supreme purpose
Superior to the wish-fulfilling jewel,
I shall at all times hold them to be very precious.”

Ruth Sonam (2001) also thinks it is the highest good which is superior to the jewel, but, unlike Heidi Köppl, she thinks we must accomplish it for them:

“May I always cherish all beings
With the resolve to accomplish for them
The highest good that is more precious
Than any wish-fulfilling jewel.”

“Through my ambition to achieve
The supreme of goals
Far better than any wish-granting gem,
May I always dearly cherish every being!”

Geshe Thupten Jinpa (2006) also thinks it is the highest aim which exceeds a wish-fulfilling gem. He translates the verse as follows:

“With the wish to achieve the highest aim,
Which surpasses even a wish-fulfilling gem,
I will train myself to at all times,
Cherish every sentient being as supreme.”

The fact that the majority of translators associate the highest aim (don mchog), rather than all sentient beings, with the metaphor of the wish-fulfilling jewel is perhaps based on the prevalence today of the second Tibetan version given above. Yet if we consider, as Geshe Thubten Jinpa does, that the commentary attributed to Dge bshes 'Chad ka ba is genuine, and that it might even reflect Dge bshes Glang ri Thang pa’s own explanations, it seems that the first of the two Tibetan versions may be the more authentic; and that, for Glang ri Thang pa, it is all sentient beings who are to be extolled above even a wish-fulfilling jewel. Still, it is interesting to note that even Geshe Thupten Jinpa does not follow this interpretation in his own translation of the root text.
i. Tibetan

ii. Secondary Sources
Posted by Adam at 7:21 PM No comments: 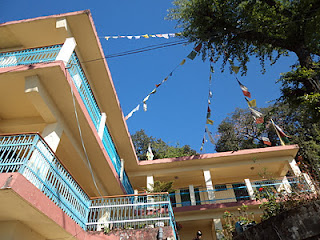 From the FPMT site:

The program consists of two years of classroom study in Dharamsala, India followed by two years of training at an FPMT center as an interpreter for a geshe.

There have been five LRZTP programs so far.

NB: LRZTP 6 will have a few places available for students wishing to follow only the 2-year classroom program without committing to becoming an FPMT interpreter.

More information will appear on the dedicated blog (http://lrztp.blogspot.com/)

This from the Ming Tsam blog:

Aspiring translators, Tibetan language enthusiasts, and Buddhist philosophy pundits, welcome to the Ming Tsam Tibetan Program. Initiated by Dzongsar Khyentse Rinpoche in 2010, the Ming Tsam Tibetan program's most central aim is to one day become a translator training program! Of course, much ground must be covered before we reach that goal and for these first years we are simply working on the basic building blocks of a foreign language program.

This year, the focus of the program will be towards students at an intermediate level. Main subjects of study will be Buddhist philosophy, grammar, and Tibetan liberal arts. However, the program's most exciting and notable feature will be the Junior Translator Pairs of Ming Tsam students and Dzongsar Shedra monks and khenpos! 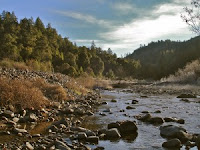 See here for information about the Dīpaṃkara Tibetan Translator Internship Program which runs from June 18th - July 31st, 2012 at Rangjung Yeshe Gomde in Northern California. Interns will work alongside established translators from the Dharmachakra Translation Committee on texts from the Kangyur to be published as part of the 84000 translation project.
Posted by Adam at 2:40 PM No comments:

OK. We are a bit late with this one, but why not post it any way. There is an Advanced Translation Workshop currently in progress with Gavin Kilty at the IBA in Tinchuli, Boudha, Nepal. It began on March 12th and will run until April 20th. More details below. 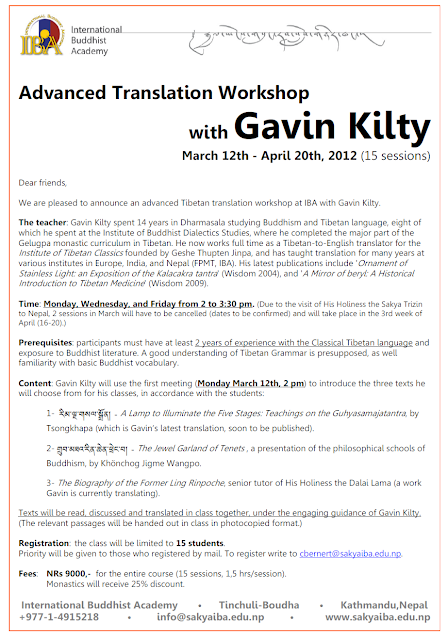