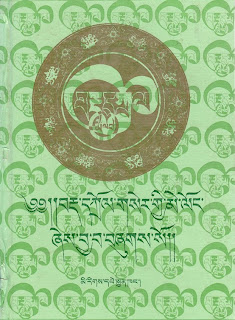 One of the translations published recently over on our sister site, Lotsawa House, twice includes the expression “heavenly lustre.” This curious phrase is a translation of the Tibetan dmu zhag[s], a term that occurs a number of times in Mipham’s writings, but is absent from most dictionaries. I say “most” because although it is not found in popular lexicons, it does appear in Erik Haarh’s The Zhang-zhung Language (p. 37), where he says it is the equivalent of mkha’ lding, and offers the translation, “the sky-soaring one, Garuda.”

Now if we were to follow Haarh when translating Mipham’s writings, we would presumably make some reference to garuḍas or birds of prey even though this would not easily fit the context, which is usually one of prosperity, wealth or abundance. Luckily, Haarh’s is not the only dictionary to include a definition. The indispensable Golden Mirror of Decipherment (brda dkrol gser gyi me long) by Btsan lha ngag dbang tshul khrims (which we have had occasion to mention on this blog before), tells us (pp. 658–659) that dmu zhag is another term for g.yang (which we have translated as “spirit of abundance”) or bcud, meaning something like “vital essence” or “nutrition.”

So why have we translated it as “heavenly lustre”? When asked about the term, our most trusted authority, Alak Zenkar Rinpoche, explained that it ultimately refers to the earliest rulers of Tibet, who, so the histories tell us, descended from, and ascended to, heaven by means of a ‘celestial cord’ (dmu thag). These divine (or semi-divine) beings, it is said, were endowed with a special, healthy-looking oil (zhag), grease or film on their skin, giving them a healthy glow or lustre. This would seem to support the spelling zhag over the alternative form zhags which is sometimes encountered.

sa gzhi la klu g.yang dmu zhag gi rgya mtsho re bskyil ba/
And on the earth, the prosperity of the nāgas swirls into an ocean of heavenly lustre.

Zenkar Rinpoche said he was “a hundred percent certain” that dmu zhag here and in such contexts has nothing to with garuḍas. Nor, it seems, does it have much to do with the class of demonic beings known as dmu (contrary to what I have said in the past).

Still a question arises: are there any modern writings then in which dmu zhag does signify garuḍa?